Geoff Nuttall, co-founder and first violinist of the world-renowned St. Lawrence String Quartet and artist-in-residence at Stanford, died Oct. 19 of cancer. He was 56. 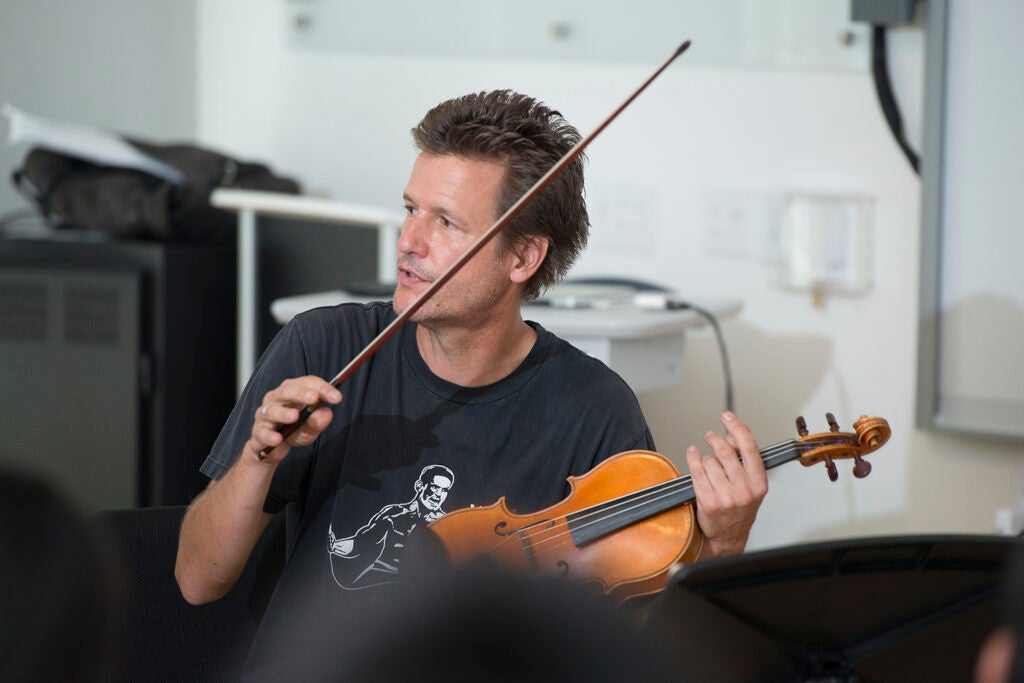 Geoff Nuttall captivated students at Stanford and audiences across the world with his energy and excitement for music. (Image credit: L.A. Cicero)

Nuttall was known for his inspiring and infectious energy that radiated on stage as a performer and in the classroom as an instructor. His fellow faculty, friends, and fans described how he brought a particular playfulness to the music he performed and his pure, unfiltered passion for music – and his humor, with words and music – made him a joy to listen to and watch.

“Geoff had such a charming and ebullient manner, boundless enthusiasm, and a disarming sense of humor that would draw audiences into the performance,” said Stephen Hinton, chair of the Department of Music at Stanford. Hinton was on the hiring committee that helped bring Nuttall, and the musical group he co-founded, the St. Lawrence String Quartet (SLSQ), to be the university’s ensemble-in-residence more than two decades ago. “Geoff far exceeded what our expectations were for an artist-in-residence.”

Together with SLSQ, some of Nuttall’s many contributions to the Stanford community included directing Stanford’s chamber music program; hosting immersive, intensive seminars and workshops for aspiring musicians of all ages and backgrounds; collaborating with faculty on courses; offering one-on-one coaching and mentorship; and performing regularly on campus – including “Sundays with the St. Lawrence” at Bing Concert Hall and other concerts with the SLSQ throughout the year.

“Geoff was an incredible and transformative presence on the campus,” said Debra Satz, the Vernon R. and Lysbeth Warren Anderson Dean of the School of Humanities and Sciences. “His electric, boundless enthusiasm – including for all things [composer Joseph] Haydn – and his vast musical knowledge inspired all of us. Along with his colleagues at the SLSQ, he forged connections all over the campus.”

SLSQ became Stanford’s ensemble-in-residence in 1998 and has been a vibrant part of the campus and local community ever since.

“Geoff Nuttall was a passionate musician and a dedicated teacher,” said Condoleezza Rice, who served as provost from 1993 to 1999 and is now the Tad and Dianne Taube Director of the Hoover Institution. Rice, who is also an accomplished classical pianist, added: “He was a force at Stanford and in the musical world. He will be missed but never forgotten.”

“Geoff was a gifted artist and a beloved colleague, mentor, and friend to so many of us across the Stanford community,” said Lloyd Minor, dean of the Stanford School of Medicine. “No matter the occasion, he always infused a sense of hope and wonder in those around him. I will miss him dearly.”

With his SLSQ colleagues, Nuttall championed new and creative forms of instruction at Stanford and in the wider community. He worked closely with Stanford faculty to introduce audiences to music in ways that were both innovative and accessible.

Nuttall’s spontaneous and engaging approach to talking about music made him an exceptional instructor as well as a musician. “He had a rare ability to communicate not only in music but also in words,” said Hinton.

While Nuttall was known for his passion for Haydn, his musical tastes were eclectic and ecumenical, said Hinton. (Nuttall had a notorious personal vinyl collection – he had 10,000 LP records in his living room and would listen to music all the time.)

Those varied tastes carried through to Nuttall’s pedagogical approach: Not only did he introduce students to a broad classical repertory, but he also paid close attention to contemporary pieces as well.

Nuttall also took a varied approach to how he connected with students – of all backgrounds and skill levels – and helped pioneer a diverse range of musical programming at Stanford and beyond.

For example, together with the SLSQ, Nuttall launched the Emerging String Quartet Program (ESQP) to provide mentorship to promising young chamber musicians. They also organized the SLSQ Chamber Music Seminar, an intensive, 10-day program where aspiring musicians – whether professional or incredibly passionate – are mentored by a member of the quartet in what they describe as a supportive and dynamic environment.

Working with Stanford Pre-Collegiate Studies, Nuttall and his SLSQ colleagues collaborated on Why Music Matters, an intensive course that explored music from many different perspectives and different timespans. In the program, which also included instruction in music theory and history, cultural history, and music technology, students were able to attend live performances and have discussions with SLSQ and other musicians.

Nuttall, along with the other members of SLSQ, also worked with Hinton to expand their course offerings through Stanford Online. Their classes included one on Beethoven and another on Haydn and had grown out of courses they had taught in person for the Stanford Continuing Studies program. Lectures are interspersed with commentary and musical demonstrations by the quartet.

Nuttall, together with the SLSQ, also frequently played works composed by his Stanford colleagues, including Jonathan Berger and Mark Applebaum.

Reflecting on what he and SLSQ brought to the campus, Nuttall once remarked: “As a string quartet, what can you add to the fabric of a university? We work with composers. We use the quartet as a weapon to connect different departments. We try to engage the students on a grassroots level.”

Nuttall also was deeply committed to engaging with the wider community. His outreach efforts were extensive and along with SLSQ, the group performed for residents at local retirement communities and schools; they even played for inmates at the San Francisco County jail.

Nuttall brought music with him wherever he went. As Satz recalled: “When I was running a series on inequality, he was willing to jump in and talk about the string quartet as an egalitarian form of organization without a single conductor,” she said, adding: “His music, teaching, and his recordings have touched so many.”

Defying expectations, his own and of his audiences

Nuttall defied what was expected from a chamber musician. Some have called Nuttall a “rock star.” Former SLSQ member and co-founder Barry Shiffman described him as “the ‘Mad Max’ of the group,” and the New York Times ran a headline that labeled him “the Jon Stewart of Chamber Music” (in their obituary of the magnetic musician, they described him as a “first among equals”). 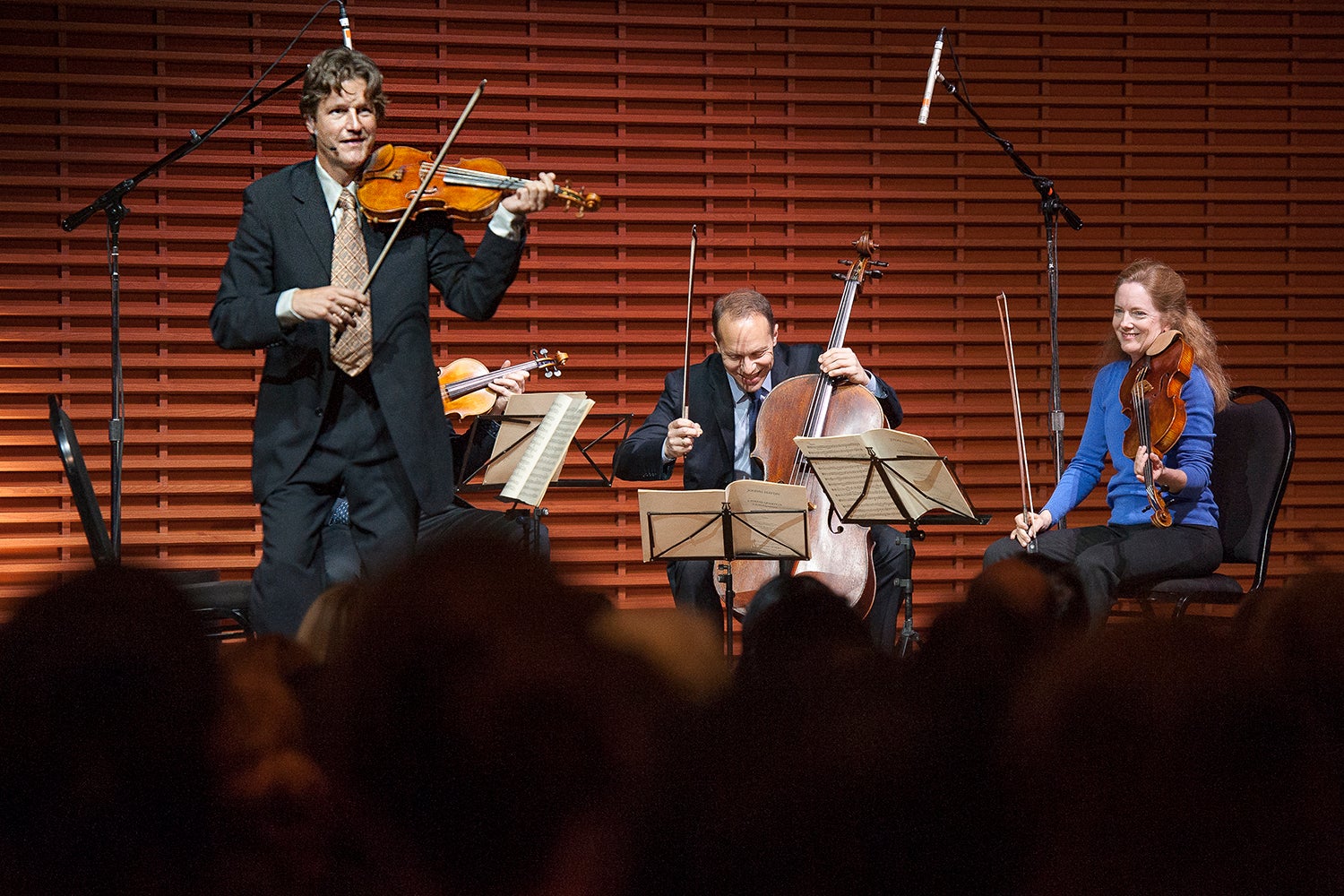 Nuttall was famous for his energetic and physical musical performances, jumping out of his chair, bouncing around on stage, and enthusiastically moving his whole body.

“One of his signature traits as a performer were his kinetic feet,” Hinton said.

“The way that he moved on stage was always very animated and exciting to watch,” said Chris Lorway, executive director of Stanford Live. “He was absolutely in love with the music that he played and was excited to share it with people. That came across in the way that he interacted with an audience – he always tried to channel his own excitement to them.”

While Nuttall’s performances were vibrant and varied, they were also full of grace and humility – both toward the composer and his audience. Nuttall made no assumptions about his audience’s musical expertise or even his own.

“He always treated every single piece as though it was an audience’s first time hearing it, and in some ways, his first time performing it,” Lorway said.

As Nuttall himself once reflected: “We’ve always been inspired by the concept of – well, we try to be amateurs, always. You want to do it because you love it and it’s easy to lose track of the fact that you’re supposed to really love it to succeed.”

Over his life, Nuttall acquired many accolades with SLSQ. The quartet received a Grammy nomination in 2002 for their performance of Yiddishbbuk, a collection of works by the Argentinean American composer Osvaldo Golijov. Their recording of Robert Schumann Quartets received a Juno Award, granted by the Canadian Academy of Recording Arts and Sciences for Best Classical Album, as well as the German critics’ award Preis der Deutschen Schallplattenkritik. Other notable awards include top prizes at the Banff International String Quartet Competition in 1992 and the Young Concert Artist Auditions.

Nuttall’s musical career took him all over the world; with SLSQ he performed over 3,000 concerts. They toured internationally and played regularly at some of North America’s more prestigious music festivals, including Mostly Mozart, Ottawa Chamber Music Festival, Bay Chamber Concerts, and at Spoleto Festival USA, which Nuttall also directed.

Nuttall also helped SLSQ navigate the challenges of the COVID-19 pandemic, which was captured in a documentary film.

Nuttall was admired and adored by many.

Within one day of SLSQ sharing the news of Nuttall’s death on their Facebook page, there were over 250 comments from fans, colleagues, and former students reflecting on how his outsized personality had an outlasting impact on their lives.

One post, from former pupil Adrian Fung, who first met Nuttall when he was 15 years old, read: “I would not be a professional musician today if it weren’t for his … insistence that I go into music and go ‘bananas.’ He taught me then … to always play any concert as if it were my last. He did this to the end, playing with such visceral intensity, exuberant joy, incredible sweetness, and depth of sorrow. … We know he never left anything on the table. I hope to honor him by aspiring to play and live every day forward as if it had that lapel-grabbing urgency and significant ‘last concert’ vibrancy. He truly lived that way.”

Many of the messages noted how Nuttall died too soon.

Nuttall was born in Texas and began playing the violin at the age of 8 after he moved to London, Ontario.

With SLSQ, Nuttall also served as graduate ensemble-in-residence at the Juilliard School, Yale University, and Hartt School of Music, acting as teaching assistants to the Juilliard, Tokyo, and Emerson String Quartets, respectively.

Nuttall lived in Portola Valley and is survived by his wife, violinist Livia Sohn, and their two sons, as well as his sister, Jennifer Nuttall of Dublin, Ireland, and his mother, Suzanne Nuttall of London, Ontario.

The SLSQ In Memoriam can be read on their website.